I regret to inform you that I will not be updating The Lonely Young Writer any longer.

But there is a silver lining.

I launched a new website: Fantasy. Literature. Life. at http://alsvossler.com

This marks a new phase in my career as a writer, so I invite you to come celebrate with with me by reading and following my new site. Please check it out for regular features such as "Flash Fiction Fridays" and "Book Reviews and Novel News Tues." You'll not only be entertained, but also will get updates on the progress of my debut novel Charybda, which will be published sometime this fall.

Maintaining the new website regularly and focusing so much on my novel writing will most likely prevent me from updating this site, but I'm leaving it here for people to use as a resource. Hopefully it has been useful to you.

Thank you for your readership! Hope to see you at the new site! 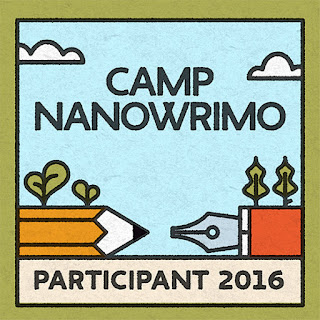 One of the nice things about Camp NaNoWriMo is that you can set your own word count, and you can even choose to edit instead of write (where you monitor time spent and convert that to words at the proposed rate of 1,000 words per hour). I chose to work on revising my novel Charybda, part of which I wrote during NaNoWriMo. Funnily, I had the bulk of the book written and used NaNo as a push to write the last part of the book. The unrevised manuscript of Charybda, in need of repairs and continuity fixes from start to finish, sat on my hard drive patiently waiting for me to finally get around to revising it. It wasn’t until the beginning of this year that I got off my behind (or put my behind in the writer’s chair, as it were) and started to work on it in earnest.

It has been a difficult road for me. I envy the writers who write quickly and require little revision on their drafts. I will never be one of those writers. I’m meticulous, which is good, but self-critical, which is not. It takes me a little time anyway, but I have occasional bouts of depression that bring all of it to a grinding halt. However, I am pleased to report that since the beginning of the year, I have made my way through thirteen or so chapters of the novel!

Camp NaNoWriMo was a fun way to motivate myself to work on my revising even more. I decided that, for me at least, 500 words per hour was a better conversion rate for time spent editing. Then, I set myself a goal of 10,000 words—which, by the by, is the minimum goal—equaling 20 hours of revision time. It sounded doable, and like a goal I might even surpass with a little dedication.

Another benefit of Camp NaNoWriMo is that it helped me realize something about revising. Revising, or content editing, if you will, is difficult to quantify. When you write, you have this nice concrete word count as your measurement. When it comes to revising, all you can measure is the time you spend working. Prior to Camp NaNo, I was setting goals based on the amount of the manuscript I got through—x number of chapters. However, each chapter is different. There was one chapter that took me two hours to ‘fix.’ There was another that took me two weeks. You see the inevitable problem.

I had been resisting the idea of measuring my revision in time, because there are times where it takes me an hour just to make a single change. That can be very depressing. How can one change really count for anything? I would be really hard on myself for things like this. Nevertheless, you have to quantify the work somehow, and it turns out that a time goal is a lot more manageable than a ‘distance’ goal. If not for Camp NaNo, I might not have ever realized this.

Even better, setting a time goal helps me work more efficiently. With the distance goal, I would get distracted and take a long time, so discouraged by how far away the endpoint was that I would give up. With the time goal, I find that the first 20 minutes or so are the most difficult, but once I’m past that, I get sucked into what I’m doing and work much harder than I would have otherwise.

I feel like I finally stumbled onto the answer for which I have been searching for some time now. There is always an abundance of advice on how to stay motivated while writing, but their is little said about the revision process. “Just keep writing—don’t worry if it stinks, you can fix that later.” There is a lot of silence when that later finally arrives. (Maybe there is a lot of advice out there, but I never seem to find it.) The answer for the “fixing it later” is to set small, manageable, quantifiable goals rather than looking at the big messy manuscript as a whole. Perhaps this should be obvious—the adage of eating an elephant one bite at a time has been around forever. For me, the problem was the quantifying of the goals. Now, I have finally settled into this system which works, and allows me to define the amount of work I’m actually doing. It allows me feel good about myself even when a single change takes an hour—because I have spent that entire hour working diligently to determine which change should be made. It gives me time to read the manuscript and make a plan for the next phase, while still feeling good because even if I make no changes, I have set myself up for success. I still get to count that hour as an achievement.

Another thing that has aided me in the revision process is giving myself rewards for achieving goals. At the end of every month, I give myself a prize if I meet my goal. Not just any prize, like going out for ice cream or something. No, this is a prize I’ll work my butt off in order to get. That’s right..a new My Little Pony! I bought a lot of ponies off of eBay, which are sitting in a box waiting for me to free them by achieving my goals. I only get one pony as a prize, though, so there are enough to keep me motivated for the next year or so.  It has worked well so far—there was one month where I did most of the work in the last week because I was so desperate to get that pony. (I don’t know if that’s pathetic or not, but I don’t care.) Now that I have a better system worked out, thanks to Camp NaNo, I’ll be well on my way to successfully earning ponies at the agonizingly slow rate of 1 pony per month. Even if the prize winning process is slow, the revising process has sped up, which is a prize all its own.

One more thing of note is that I have changed my terminology when referring to what I am doing to my manuscript. I had been calling it editing, which is not completely inaccurate. I am, after all, content editing. But since editing can also refer to line editing—going through line by line and fixing grammatical and stylistic errors, my subconscious was confused about what I was really doing. I would feel bad that I wasn’t at the final stage of perfecting the work. Now that I have changed to the term revising, I feel that it is a more accurate reflection of what I am doing. It also takes off the subconscious pressure that comes with the word ‘editing.’

It has been an enlightening summer, to be sure, and I feel that the rest of my year will be filled with even more successes.


What helps you out with revising your writing?
Want to be sure you don't miss any of my posts but don't feel like checking back every day? Use the form to subscribe and get updates sent straight to your inbox! You can also follow me on Twitter: @ALSVossler
Posted by A.L.S. Vossler at 4:25 PM 1 comment:

A little bit about me...

A.L.S. Vossler
I have been writing, off and on, since I was fourteen years old. I have a Bachelor's degree in English and a serious passion for Science Fiction and Fantasy. Also, I love cats.